Team PNG marching out at the 1962 British Empire and Commonwealth Games, Perth, Australia 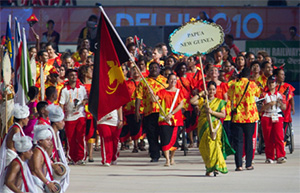 Papua New Guinea can be proud of the performances of its teams attending the Commonwealth Games over the years. In our very first games we won a medal in boxing with Kenneth Hopkins punching his way to bronze in the 71 kg division.Boxing has contributed two more medals to PNG’s overall medal tally of nine at the Commonwealth Games.  These medals have come from lawn bowls,shooting, swimming and weightlifting. Our first gold came courtesy of Geua Tau when she defeated New Zealand’s Millie Cecilia Khan 25-18 in lawn bowls (women's singles) during the 1990 Commonwealth Games.Papua New Guinea's second gold medal came in 2006 Commonwealth Games in Melbourne, when Ryan Pini won the men's 100m butterfly event in swimming, with a time of 52.64 seconds. The race united the nation as thousands of Papua New Guineans celebrated with Ryan and Dika Toua, who had won silver in weightlifting at the same games, when they returned home for a ticker-tape parade.