PNG, PART OF THE CELEBRATION THAT IS THE (SOUTH) PACIFIC GAMES

Being one of the founding members of the Pacific Games Council and with the newly formed Games Association in place, the Territory of Papua and New Guinea was given an opportunityat sending a team to the first ever South Pacific Games in Suva, Fiji. The eventual team that boarded the flight to Fiji competed in six out of the eight sports on the games program. These sports were Association Football (Soccer), Athletics, Basketball, Boxing, Lawn Tennis and Swimming and Table Tennis.The sports that we did not participate in were rugby union and volleyball.The contingent totaled 86 which included 55 male and 23 female competitors with 7 male and 1 female officials. PNG finished second on the medal table behind the hosts, picking up nine gold medals, 12 silver and 11 bronze. Our gold medal winners included members of the team who a year earlier had competed in the British Empire and Commonwealth Games, with our first ever gold at an international sporting event coming from Edward Laboran in the high jump. Other athletes to emulate this feat included Eoe Ivaharia in the javelin, Mathew Julius in boxing and Bruce Ritcher who was a member of our gold medal winning 4x110 yards and 4x400 relay teams. Other gold medalists included Charles Harrison in the 400 yards, Mike Joyce in the 800 and 5,000 yards and swimmer Joel Tovitolon in the 110 yards butterfly.

After attending the first two South Pacific Games in 1963 in Fiji and 1966 in Noumea, PNG put its hand up to host the third South Pacific Games in 1969. The games held between August 13th and 23rd, proved to be a great success despite initial doubts as to the capacity of the Territory to pull of such a feat. With assistance from Australia in the form of funding and expertise, the local organizing committee was able to draw on this support and their own experience to ensure that any fears related to security and unpreparedness were dispelled when our Pacific Island neighbours arrived in Port Moresby.

The logo for the games featured the green, yellow and red of the PNG Territory flag with a bird of paradise at the centre holding three leaves to symbolize the third games. Existing venues first constructed by the Australian army were restored, while new venues and facilities were developed with many being located in the suburb of Boroko along what today is the Bisini Parade.

Sport was not the only thing on display for all to see; the local organizing committee ensured that our unique and diverse culture was a prominent feature of the games. Performances by cultural groups were held every night at the Ela Beach. Examples of traditional structures such as Trobriand yam houses and Sepik haus tambarans were built for display. Also on display were artifacts from throughout the Territory with locals dressing up in traditional costumes. The buzz of out of sport entertainment was completed with competitions for cultural artifacts, school essays and local art. 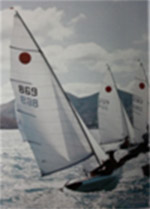 Buzz was also created from the visit of the Duke and Duchess of Kent to officially open the games, reflecting the immense effort of the local organizing committee to secure the presence of the two royal visitors. The Duke and Duchess were genuine crowd pleasers, settling in well to the tropic environment and mingling with the crowd. This same pacific way of approaching matters was evident throughout the games and was a welcome attitude which allowed for the games to be enjoyed by all without any major complications.

However the main attractions for the crowd were the sports on offer and the crowds flocked to the various venues to watch their fellow Territorians compete against the best from the Pacific. A series of inter-territory competitions as a build-up to the games had unearthed many hopefuls and potential stars.  PNG used local knowledge to good use to win both sections of golf on a rain soaked course.Our sailors were also able to draw on their local knowledge by winning the yachting event, the first time it had been staged at the SP Games. The PNG men's swim team under Australian coaching and urged on by a partisan crowd won six of the ten men's swimming events. At the end of the games, PNG was placed a very respectable 2nd place behind the New Caledonians, with a haul of 23 gold, 23 silver and 18 bronze.

Papua New Guinea came alive once again in 1991 when from September 7th to the 21st; Port Moresby welcomed athletes from around the Pacific to the ninth South Pacific Games. 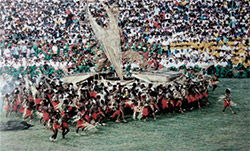 The 1991 games went down as by far PNG’s best performing games, not only for our sporting performances but also for the way in which the country united to host what is widely regarded as one of the best games ever. Behind the chairmanship of first Sir Anthony Siaguru and then Mr Bart Philemon, the South Pacific Games Foundation was able to secure substantial Government and private sector support for the games which allowed for facilities and sporting venues to be in place both in Port Moresby and Lae, and for our elite athletes to be properly prepared for the games through the Operation Gold program. This level of corporate support introduced a new era of sponsorship for the South Pacific Games.

The 1991 SP Games are also fondly remembered for the colourful and entertaining Opening and Closing ceremonies, which encapsulated the overriding feelings of unity and national pride the games had managed to evoke in the people. The ceremonies showcased to the rest of the Pacific our wonderful cultural diversity while at the same time displaying the colourful pageantry andgrandeur expected of such events. 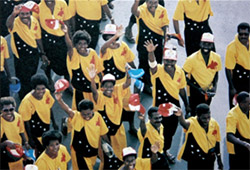 Our athletes did not disappoint as PNG topped the medal table with 44 gold, well ahead of French Polynesia on 30 and New Caledonia on 29 gold medals. It was and still is the first time PNG finished first on the medal table and it broke the stranglehold New Caledonia had enjoyed on the South Pacific Games going back to 1966. Our gold medal performances came from a variety of sports. In the athletics, our men dominated the sprint events winning gold in the 100m, 200m, 400m, 400m hurdles and both the 100m and 400m relay. Takale Tuna and SubulBabo became national heroes and household names as a result of their performances. In the women’s athletics Iammo Launa proved too good in the Javelin and Heptathlon and we also won gold in the 400m relay. In the team sports our women’s basketball team impressed all with their gold medal winning run, beating Tahiti in the final and along the way becoming the first women’s team to score 100 points in a game. Our boxers proved a class on to themselves, bagging six gold medals. 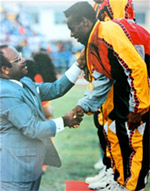 Not to be outdone, our men’s and women’s lawn bowlers won every gold medal on offer except for both the single events. Our golfers took it one step further by winning all the medals on offer, being the individual and team events for both men and women. Our cricketers were equally as dominant as they swept all aside on their way to gold. In the other bat and ball game, our men’s and women’s softball teams both proved to be the best in the Pacific, picking up gold from the diamond. With the racket and ball, PNG was most dominant in squash as like golf, we won both the individual and team events for male and female. Although the pool was dominated once again by the Francophones, our women were able to pick up gold in the 4 x 100 relay free and 4 x 200 relay free, while PNG swimmer Kimberley Dutton won gold in the 800 m freestyle ahead of the sensational 15 year-old Tahitian Diane Lacombe. Our weightlifters were strong contributors to our medal haul, adding six gold medals to our overall tally.

The 1991 SP Games are remembered fondly by all; not only for the performances of Team PNG but also for its spectacle, the display of our unique PNG culture and the friendliness of the people towards the visitors as well as towards each other. The Prime Minister Sir RabbieNamaliu captured the sentiment when at the Closing Ceremony he said, “In every respect, the games have achieved all we had hoped for.” 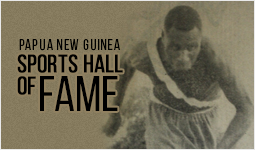